The Permutations project involves a “portrait” of the facade of a derelict building and demolition debris collected from all over the city.
The photographic image in this case preserves the -appearance of a presence- but is insufficient for representing what is lost.
To attach the image to a physical fragment, adds a temporal and physical dimension that is not implicit in the image itself. No photograph could be able to condense all the layers of possible associations than that of the demolition debris.
By attaching this two indistinct fragments together, the space is texturally transfigured into a palimpsestic appearance; one that transcends the scene and acknowledges the dialectic of present and past, replacing the insufficient documentation of only the snapshot. I like that the image then presents itself as this inert weight holding poorly from the wall but it´s collapse and complete fragmentation is inevitable. 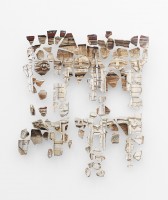 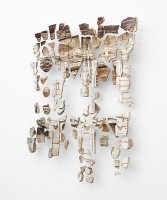 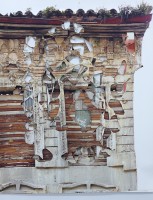 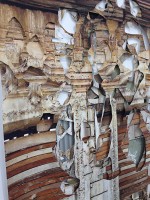